The focus of this further education action - which consists of three parts - lies on radical honesty. This is a new, modern approach towards leadership on eye-level.

In most companies, people do two jobs: They work around 20 hours in the job for which they are hired, but spend the other half of their working time on an activity for which no one pays them - to cover up their weaknesses, to shine and to be perceived positively by others. This is probably the biggest possible waste of resources in companies. The obsessive and energy-consuming effort to constantly hide our vulnerabilities and weaknesses affects not only our productivity, but also our satisfaction, our ability to give honest feedback and our influence on others.

However, the good news is that there is an alternative to this behavior: Honest Leadership. This approach, which is being chosen by more and more top performers from science and business, aims to lead other people by addressing them on an emotional level and by inspiring them to follow. In this training you will learn how to remain authentic and confident even in situations of great uncertainty and complexity. This will enable you to mobilize people for your cause - regardless of whether you are a hip new work startup with flat hierarchies, an entrepreneur who wants to bring your idea into the world, or a corporate executive who wants to shape the culture of cooperation. This course is held in German language. 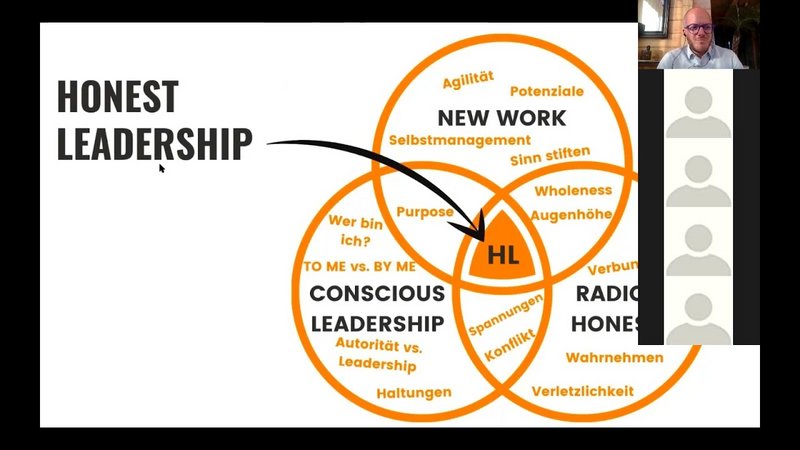 a) Goals and target group

In this training we deal intensively with our own honesty in situations that are difficult to predict. It is about saying goodbye to the claim of always being perfect and having to play a certain role and instead paying more attention to one's own senses and trusting one's own intuition. Both work quite well even in complex, constantly and rapidly changing environmental conditions - in contrast to the models, concepts and ideas that may even have brought us to this crisis.

Get out of your comfort zone and join this workshop series on Honest Leadership as a communication technique and attitude that allows you to resolve conflicts instead of avoiding them, to give and accept feedback without having to defend yourself, and to be as much as possible in the here and now instead of getting lost in thoughts and ideas.

This training is aimed primarily at those who

b) Topics and competences to gain

In the course of the three modules you will learn...

c) How to book your place

Focus on group work about
radical honesty and leadership

Focus on structural
rooms for creation

This modular training includes three dates in fall 2021, which can be booked individually or as a package. Booking is reserved exclusively for Alumni Club members. The booking deadline for the three modules is September 15. A booking confirmation (for the attendance date on 17.09.) or the invitations to the ZOOM sessions (on 21. and 23.09.) will be sent separately by e-mail.

If you attend all three modules, you will receive a certificate of attendance.

e) About the lecturer

Bernhard Reingruber is a coach, leadership and radical honesty trainer. After completing a master's degree in strategy and innovation management, he completed and later co-designed Teach For Austria's leadership program. He is passionate about Conscious & Adaptive Leadership, mindfulness and finding one's own essence. For this he offers Honestlead workshops for Change Makers.

You can view your registration status in our club lounge. Each workshop only takes place if there are at least eight attendants.

Not a member yet? If you are a graduate, student or employee of the FH Upper Austria, register now via our online form and try out a membership in the Alumni Club for free until the end of this year. In 2022, the annual fee is EUR 30,-.

Physical workshops will be cancelled or held online if COVID19 regulations require to do so.

We want to remind you that at all of our events, our terms and conditions apply.